To All the Boys: Always and Forever, Lara Jean

Lara Jean's letter-writing days aren't over in this surprise follow-up to the bestselling To All the Boys I've Loved Before and P.S. I Still Love You.

Lara Jean is having the best senior year a girl could ever hope for. She is head over heels in love with her boyfriend, Peter; her dad's finally getting remarried to their next-door neighbor, Ms. Rothschild; and Margot's coming home for the summer just in time for the wedding.

But change is looming on the horizon. And while Lara Jean is having fun and keeping busy helping plan her father's wedding, she can't ignore the big life decisions she has to make. Most pressingly, where she wants to go to college and what that means for her relationship with Peter. She watched her sister Margot go through these growing pains. Now Lara Jean's the one who'll be graduating high school and leaving for college and leaving her family—and possibly the boy she loves—behind.

When your heart and your head are saying two different things, which one should you listen to?[1]

Now in her final year of high school, Lara Jean Song Covey is excitedly looking forward to attending school with her boyfriend, Peter Kavinsky, at the University of Virginia (UVA). Peter has been accepted early on a sports scholarship for lacrosse. When acceptance letters come in, Lara Jean learns she has been rejected. After being wait-listed to the University of North Carolina at Chapel Hill (UNC), Lara Jean briefly loses hope of attending college, but is eventually accepted to the College of William & Mary and decides to attend school there. When Peter suggests that they can visit each other every weekend, and that after freshman year Lara Jean can transfer to UVA, she begins to consider it her primary goal.

At home, Lara Jean's father continues to date their neighbor, Trina Rothschild. When Margot returns home from university in Scotland with her new boyfriend, Ravi, Lara Jean's father asks all of his daughters for their blessing to wed Trina. The sisters all agree, though Margot, who has not seen the progression of her father's relationship with Trina, is less excited and accepting than her sisters and thinks it won't work.

As Lara Jean finishes high school and settles into her new routine, adjusting to time spent without Peter and to Trina's presence in her home, she learns that UNC has taken her off the wait-list and accepted her. Her best friend Chris urges her to take a spontaneous road trip to the campus to see what she will be missing out on if she sticks to her plan. Lara Jean falls in love with the campus and decides to go to UNC, despite the fact that it is even farther away than William & Mary.

Everyone is happy to hear Lara Jean's news, except for Peter. At graduation, Lara Jean's father announces that he will be sending Lara Jean and her sisters with their grandmother to Korea for a month in order to connect with their heritage. Lara Jean acts excited but is secretly unhappy because it will cut into her dwindling days with Peter.

Lara Jean and her friends rent houses for Beach Week. While there, she decides to sleep with Peter for the first time. As they are about to have sex, Peter becomes uncomfortable and the two do not go through with it. When she returns home, Lara Jean meets with Peter's mother who tells her that Peter has started talking about transferring to UNC. She asks Lara Jean to consider breaking up with Peter so that he can have a good college experience.

At the bachelorette party for Trina, Lara Jean gets drunk for the first time and breaks up with Peter because she didn't think long distance would work. When he asks her if she only wanted to sleep with him to neatly wrap up their relationship, she says yes. Peter is deeply hurt, and when Lara Jean sobers up she is devastated. Trina urges Lara Jean to reconsider and at her father's wedding, Lara Jean spots Peter and decides to approach him. She tells him that she loves him and she wants to continue their relationship, to which he agrees. She also tells him she didn’t mean what she said about neatly wrapping up their relationship by sleeping together; she wanted to do it because she genuinely loves him.

Despite not knowing what the future holds, Lara Jean and Peter decide to stay together. In Lara Jean's yearbook that Peter forgets to bring back, he writes a new contract between the two, echoing the contract drafted when they were fake dating in the first novel. The book ends with Lara Jean feeling confident that her relationship with Peter will last.

Initially, the To All the Boys I've Loved Before series was supposed to end with the previous installment.

After the release of the second book, Jenny Han began writing the sequel in secret. In an interview with Entertainment Weekly, she stated that "I wanted to be sure I could do it". She was important to her to explore themes such as growing up and making big choices, such as leaving behind the things you've become accustomed to in favor of something new and beneficial to yourself.[2]

In 2017, the novel was nominated for the Goodreads Choice Awards for "Best Young Adult Fiction". It ultimately ended up ranking 5th with a total of 19,487 votes.[3]

Main Article: To All the Boys: Always and Forever, Lara Jean

On August 15, 2019, the official Instagram account for the movie trilogy confirmed that the movie was entering production.[4]

On August 17, 2019, Noah Centineo stated in a tweet that "Tonight was my last night as Peter Kavinsky", indicating that the last installment of the To All the Boys I've Loved Before movie series had wrapped up filming.[5] A month later, on September 11, 2019, Janel Parrish posted a photo of a lock labeled "Always and Forever - Seoul Sisters", which Lana Condor, Anna Cathcart, and she had all signed, again confirming that the third film had finished filming.[6] 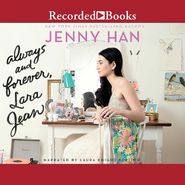 Vietnamese Edition 2
Add a photo to this gallery

Retrieved from "https://to-all-the-boys-ive-loved-before.fandom.com/wiki/Always_and_Forever,_Lara_Jean?oldid=7534"
Community content is available under CC-BY-SA unless otherwise noted.