Chris
Chrissy (by Genevieve and her grandmother)

Trevor Pike (To All the Boys: P.S. I Still Love You)

After Chris graduates from High School she takes a gap year in Costa Rica.

Chris is always by Lara Jean's side. They're best friends, even though Chris has a more free personality. Chris gets along with most but she strongly dislikes her cousin and ex-friend, Gen.

To All the Boys: P.S. I Still Love You[edit | edit source]

To All the Boys: Always and Forever[edit | edit source]

Chris starts to secretly hook up with Trevor and eventually they start to date, after he convinces her to go to the prom with him. Chris declares that she's going to Costa Rica and no man will keep her back from doing that.

Chris is very outgoing, spontaneous, and energetic. Unlike Lara Jean, she loves to socialize and frequently attends concerts and parties. Despite her otherwise carefree nature, she deeply cares for the people she loves, taking care of Lara Jean after the incident with Anonybitch in P.S. I Still Love You and defending her when she is being attacked by Genevieve. In To All the Boys: P.S. I Still Love You, it is also shown that she enjoys taking care of animals.

Chris is described as having blonde hair and blue eyes. In Always and Forever, Lara Jean, she dyes her hair lavender.

In the movies, Chris has blonde hair with pink streaks on the left side and blue eyes. She is also shorter than Lara Jean.

Chris and Genevieve don't really get along, despite being cousins. Chris believes that Gen is spoiled and entitled because she always gets what she wants. The two constantly oppose each other, especially since Gen likes to mock Lara Jean, Chris' best friend.

Lara Jean and Chris are best friends. They are practically inseparable. Lara Jean is the more sensible one while Chris is the wild, outgoing one. In To All the Boys I've Loved Before, Lara Jean says that Chris is her oldest friend. Although Chris is Gen's cousin, she is always there to defend Lara Jean against Gen.

Chris approves of Lara Jean's relationship with Peter. She believes that he has a positive effect on her and believes Peter makes her happy. She seems to be on good terms with Peter, although they don't often interact with each other. She is, however, skeptical of how loyal Peter is to Lara Jean considering his past with Gen but loses said skepticism after P.S. I Still Love You when Peter actively chooses Lara Jean over Gen.

In the books, Chris and Trevor do not interact with each other at all. However, it is stated in P.S. I Still Love You that they used to be childhood friends. In To All the Boys: P.S. I Still Love You, Trevor and Chris meet again when they retrieve the time capsule they buried when they were children. They get along well and are seen together several times afterward, eating lunch at school together and hanging out. By the end of the movie, it becomes evident that the two are now in a relationship. In To All the Boys: Always and Forever, Chris goes to the prom with Trevor and they keep dating, even though Chris decides to move to Costa Rica.

Chris and Margot do not interact much in the books but they seem to not get along very well. Chris believes Margot is too uptight, while Margot believes Chris is too carefree.

Chris and Kitty are quite similar in that they are both rather carefree and energetic. Because of that, they get along well and Kitty looks up to Chris. 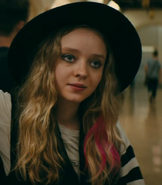 Add a photo to this gallery

Retrieved from "https://to-all-the-boys-ive-loved-before.fandom.com/wiki/Chris?oldid=7553"
Community content is available under CC-BY-SA unless otherwise noted.