Genevieve "Gen" Mitchell is Peter Kavinsky's ex-girlfriend and a popular student at school. She used to be best friends with Lara Jean Covey up till high school but during a game of spin the bottle in 7th Grade Lara Jean kissed Peter, Gen's crush, which prompted the breakdown of her friendship with Lara Jean.

Genevieve is first mentioned when she and Lara Jean become close friends in 6th grade, mainly due to the fact that they live really close to each other. Gen gets very upset at Lara Jean when she kissed Peter during a game of spin the bottle, because Gen has a crush on Peter and Lara Jean knew it. Peter and Gen start dating in 7th grade, around the same time when Lara Jean and Gen’s friendship begins to fall apart. Genevieve then moves to a different neighborhood, but still goes to the same school. She and Peter become popular and leave the rest of their group behind and Gen becomes best friends with a girl named Emily when they get to high school. Genevieve loses her virginity to Peter during their freshmen year in her parents basement. She and Peter continue dating until the very beginning of junior year.

We meet Genevieve in the beginning of the movie, when Lara Jean accidentally bumps into Gen in the hallway on the first day of school. Genevieve criticizes Lara Jean’s boots, and Chris, her cousin, comes up to defend LJ. Later, Gen dumps Peter for some college guy she met, and Peter really wants to get back with her. At school the next day, Peter shows up with Lara Jean, his hand in her back pocket. Gen becomes extremely jealous and confronts Peter about his relationship with Lara Jean in the bathroom of a party. She then takes LJ’s lucky scrunchie from Peter and never returns it. Genevieve never talks to Peter at school, but they call each other every night and she always blows his phone up with texts. They later meet on the bleachers and she asks Peter if Lara Jean is going on the ski trip. Peter says yes, and Gen becomes jealous again, saying that the ski trip was her and Peter’s thing. She then reveals that she wants to get back together with Peter. On the bus of the ski trip, Gen sits with Peter, just to make Lara Jean jealous. They ski together and Peter tells Gen to meet him in the hot tub that night. Lara Jean shows up before Gen and she takes a video of Lara Jean and Peter making out in the hot tub and anonymously posts it to Instagram, claiming the two of them had sex. Once off the bus, Gen is sickly sweet to LJ and shows her the lucky scrunchie she claims Peter gave to her, and tells Lara Jean that Peter slept in her room the night after Lara Jean kissed Peter. Lara Jean then confronts Gen in the bathrooms, extremely upset that she posted the video of them on Instagram. Gen denied posting the video and reveals that she has been upset at Lara Jean since she kissed Peter in 7th grade during a game of spin the bottle, when LJ knew that Gen had a crush on Peter.

With their relationship on the rocks, Lara Jean becomes increasingly jealous of Peter's relationship — and past relationships — with Gen, and fears that the two could be restarting their former relationship. It is eventually revealed, however that Gen's parents are divorcing and Peter has been platonically helping her understand and struggle through. Genevieve is still cold towards Lara Jean until the end of the film. She was not invited to Lara Jean’s tree house party but went anyway, since she heard about it from Peter. When they open the time capsule, Gen hides the friendship bracelet in a tree nearby because she is embarrassed because she put the same thing in as Lara Jean. Later, when Lara Jean asks Gen to meet her in the treehouse, she shows Lara Jean that she put her friendship bracelet in the time capsule, and tells LJ that Peter is crazy about her, and the only reason she calls Peter is because her parents are splitting up and Peter has already gone through a divorce.

To All the Boys: Always and Forever[edit | edit source]

Gen gets accepted to NYU (New York University) and during the senior trip to New York City she goes on a college tour to NYU. She meets a senior at NYU named Heather that she becomes friends with who invites her to a college party. Later that night she goes to a college party at NYU with her cousin Chris and Lara Jean Covey. Genevieve then goes to prom and hangs out with Lara Jean and Chris. After their graduation, Gen celebrates by bowling with Lara Jean, Chris, Peter, and Trevor. She really shows her true colors to Lara Jean when asking her about her trip to Korea and helping her decide to choose NYU over Berkeley.

It is said in the book that Genevieve has blonde hair, a nose with a bump on it, and is endearing and very attractive.

In the movie, she has wavy copper blonde hair, blue eyes, and pale skin. She is Caucasian.

Genevieve is very manipulative but can be sickly sweet to others if needed. She likes to toy with people's emotions if it means getting her way and can be petty and vindictive. However, it is said that she used to be more kind and friendly up until her last year of middle school when Lara Jean kissed Peter in a game of spin-the-bottle and broke her trust.

In the second film, she shows a softer side to herself, being there for Lara Jean after her breakup with Peter. She also shows that she still has tender feelings for her ex best friend when she reveals to LJ that she kept the friendship bracelet that the two made together, and tells LJ that Peter really is crazy about her.

Chris is Genevieve's cousin. They don't have a close relationship, Chris choosing Lara Jean's side over Gen's any day, and trying to distance herself from her cousin.

Peter Kavinsky is Genevieve's ex-boyfriend. She was very clingy and controlling and hypocritical, barely talking to him in person one minute and blowing up his phone with texts the next. They broke up at the beginning of To All the Boys I've Loved Before because of relationship conflicts. She and Peter are still friends throughout the series, much to Lara Jean's dismay.

Lara Jean used to be friends with Genevieve until they started high school. She loved Lara Jean and her family until she saw Peter kiss Lara in her friend's basement. In the movie, the same situation occurs when Lara Jean kisses Peter during a game of "Spin the Bottle". Genevieve thinking Lara kissed Peter knowing she liked him and, feeling like Lara Jean had broken her trust, she stopped being friends with her. Lara Jean currently dates Peter Kavinsky.

John and Genevieve were childhood friends. Gen used to believe Lara and John were meant to be together, just like her and Peter. Ironically, both of those couples didn't work out.

To All the Boys: P.S. I Still Love You

To All the Boys: Always and Forever 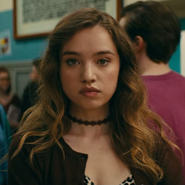 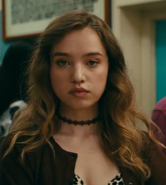 Add a photo to this gallery

Retrieved from "https://to-all-the-boys-ive-loved-before.fandom.com/wiki/Genevieve?oldid=7547"
Community content is available under CC-BY-SA unless otherwise noted.