Katherine "Kitty" Song-Covey is Lara Jean's and Margot's little sister. She is portrayed by Anna Cathcart.

Katherine Song-Covey was born to Eve Song and Daniel Covey

When Kitty was two her mother Eve Song passed away.

Kitty Covey is the one who sends out Lara Jean's letters because Lara Jean teased her about liking Josh. She plays an essential role in bringing Lara Jean and Peter together.

With Valentine's Day approaching, Kitty notices her father, Daniel, talking with their neighbor, Trina Rothschild. She approves of the relationship that could possibly form, however Lara Jean believes the relationship to be friendly. As Valentine's approaches, Kitty fashions a makeshift card for Trina and posts it on Daniel's behalf.

Trina and Lara Jean talk later and Lara Jean reveals the card was not from Daniel, but actually from Kitty. Trina tells Lara Jean that she had guessed, given the large amount of glitter present.

Kitty has chest-long brown hair and brown eyes. In the movie, her hair color is changed from brown to auburn, and she wears glasses and has a freckle above her lip. Unlike her sisters, she resembles her father, making her look more Caucasian than Asian. Because of that, her hair and eye color are much lighter than her sisters'.

Kitty never really got to know her mother since she was very young when Eve died. She also barely has any memories of her mother.

Trina Rothschild is Kitty's next-door neighbour. Kitty instantly takes a liking to her and her dog, especially since Trina also helps her train her own dog, Jamie Fox-Pickle. In Always and Forever, Lara Jean, she successfully manages to get her father, Daniel Covey, to date Trina and they get married, making Trina her step-mother.

Margot Covey feels very protective of Kitty, almost treating her like a daughter, as Margot feels like it's her job to be a mother to Kitty.

Kitty and Lara Jean are very close, despite the way they often treat one another. It was Kitty who sent all of Lara Jean's letters and despite all of that, Lara Jean still loved her. Kitty also defended Lara Jean in P.S. I Still Love You even though at first, she defended Peter. But, in the end, Kitty was and will always be on Lara Jean's side.

Kitty likes Peter and they get along well. Peter sometimes takes Kitty on "dates" and does various activities with her. Kitty is not afraid to take Peter's side when he and Lara Jean fight when she believes Peter is right, even when that means going against her sister. She is also quite affectionate towards him, sharing things like her favorite yoghurt drink with him, which she usually doesn't do.

After Josh's fallout with both of her sisters, Kitty mentions that she misses Josh since she grew up with him and therefore sees him as part of her family.

Kitty often compares him to Peter throughout P.S. I Still Love You. 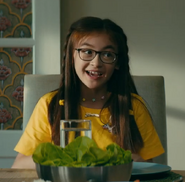 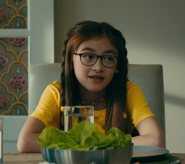 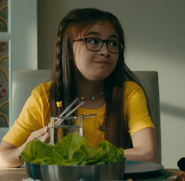 Jenny Han and Anna Cathcart
Add a photo to this gallery

Retrieved from "https://to-all-the-boys-ive-loved-before.fandom.com/wiki/Kitty_Covey?oldid=7584"
Community content is available under CC-BY-SA unless otherwise noted.