Margot Covey is Lara Jean's and Kitty's older sister. She is portrayed by Janel Parrish

Margot is described as a very intelligent girl. She has a very strong character and always does what she thinks is best for her in the long term, even if it means being extremely dissatisfied. At the request of her mother, she breaks up with Josh Sanderson at the beginning of To All The Boys I've Loved Before to go to the University of St. Andrews in Scotland for their studies in Anthropology. She loves her sisters and does everything possible to be a "mother replacement" for them after their mother's death.

Eve Song is Margot's mother. She died after slipping on the wet floor and hitting her head, resulting in fatal head trauma. Margot was 12 when this happened, so she still remembers a lot about her mom and tells stories to Lara Jean and Kitty about her.

Lara Jean is Margot's younger sister by 2 years. It's mentioned that they used to fight a lot when their mother was still alive but started to get along well after her passing. They became really close.

Kitty is Margot's younger sister. Margot is very protective of Kitty, almost treating her like a daughter, as Margot feels like it's her job to be a mother to Kitty.

Josh and Margot dated for two years. Their relationship is described as very intimate since they've known each other since childhood days. Although Margot and Lara Jean promised each other that they would just have sex once they turned 21, Margot broke the promise by having sex with Josh. In To All the Boys I've Loved Before, Margot and Josh break up because Margot promised her mother that she wouldn't be the girl who goes to university having a boyfriend. In P.S. I Still Love You, he tries to get back with her, but she declines, officially ending their relationship forever.

Ravi is Margot's boyfriend, whom she met at St. Andrews University.

At first, Margot is skeptical of Peter. She doesn't trust him and doesn't like him. Partly because she thinks that he isn't right for Lara Jean. She also thinks that Peter, and the rest of the lacrosse team are douches. But near the end of the first book, she starts to trust Peter, especially after he helps Lara Jean take off the video of them in the hot tub in P.S. I Still Love You.

Margot and Chris don't get along. Chris believes that Margot is too stuck-up, strict and up tight. While Margot doesn't like how easy-going Chris is and thinks Chris is bipolar. Despite their differences, they still work together in P.S. I Still Love You when Lara Jean's hot tub video is uploaded to Anonybitch.

Margot and Josh breaking up 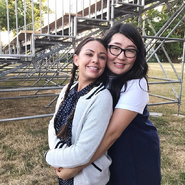 Retrieved from "https://to-all-the-boys-ive-loved-before.fandom.com/wiki/Margot_Covey?oldid=7586"
Community content is available under CC-BY-SA unless otherwise noted.