To All the Boys I've Loved Before
Always and Forever, Lara Jean

P.S. I Still Love You is a 2015 young adult romance novel by American author Jenny Han, first published by Simon & Schuster and released on May 26, 2015. It is the sequel to the novel To All the Boys I've Loved Before, released on April 15, 2014, and was followed by a third installment, Always and Forever, Lara Jean, released on May 2, 2017. The audiobook is narrated by Laura Knight Keating.

A film adaptation of the book titled To All the Boys: P.S. I Still Love You was released on February 12, 2020 on Netflix. It is a direct sequel to To All the Boys I've Loved Before.

She and Peter were just pretending. Except suddenly they weren't. Now Lara Jean is more confused than ever.

When another boy from her past returns to her life, Lara Jean's feelings for him return too. Can a girl be in love with two boys at once?

In this charming and heartfelt sequel to the New York Times bestseller To All the Boys I've Loved Before, we see first love through the eyes of the unforgettable Lara Jean. Love is never easy, but maybe that's part of what makes it so amazing.[1]

After the fight between Lara Jean, Josh, and Peter at the Coveys' Christmas party, Lara Jean realizes that she has fallen for Peter. Hoping to reconcile, Lara Jean heads over to Peter's house with a love letter she hopes for him to read. After a brief talk, the two almost kiss but his brother interrupts, and then they decide they want to be a real couple. At school, Lara Jean discovers that someone has posted a video of her and Peter making out in the hot tub from the ski trip. A rumor spreads that the two were having sex. After seeing the video during school, Peter is furious and warns the anonymous poster not to mess with Lara Jean.

Before Margot leaves to go back to college in Scotland, she tells Lara Jean to get a job. Taking Margot's advice, but not wanting to work at the hospital gift shop like her dad suggested, Lara Jean makes up a story on how she's volunteering to start a scrapbooking class at the Belleview retirement home. Not wanting her family to find out the truth, Lara Jean goes to get the job and ends up liking it. She gets closer to Stormy, an elderly woman who has a feisty temper. Stormy gives Lara Jean relationship advice, though it usually contradicts with Lara Jean's thoughts. Meanwhile, Kitty begins an attempt to set up their father with the neighbor across the street, Trina Rothschild.

One day, Lara Jean receives a letter in the mail from John Ambrose McClaren, telling her that he received the love letter she wrote him. Lara Jean and John soon become pen pals. When Lara Jean finds out that the neighborhood treehouse she and her friends used to hang out in will soon be cut down, she decides to throw a reunion party there and invites John. She also plans to open a time capsule that they buried at the treehouse when they were in seventh grade.

At the treehouse party, Peter brings his ex-girlfriend, Genevieve, knowing that Lara Jean did not want her to come. Lara Jean also finds out that the two were hanging out before the party, prompting her to become suspicious, and a little jealous, of Peter and Genevieve's "relationship". During the party, Lara Jean distracts herself from Peter by focusing on John. The group takes turns to pull an item from the time capsule and then decides to play Assassins, which they often played during their childhood. For the prize, they decide the winner will be granted one wish. Lara Jean is determined to win since she has never previously won a game.

After the party, Lara Jean and Peter argue about John and Genevieve, and Peter insists there is only friendship between him and his ex. During the Assassins game, Lara Jean discovers that Peter and Genevieve have formed an alliance, causing her to become suspicious again. Lara Jean finds out that Stormy is John's grandmother when he comes to visit the retirement home, and also eliminates him from Assassins. Her next target is now Peter, and John decides to help her out.

Meanwhile, Lara Jean and Peter break up when she discovers that Peter knew Genevieve was the person who sent out the video from the hot tub. She tells him if she wins Assassins, she would wish that nothing had happened between them. Lara Jean begins spending more time with John as they scheme to take out Genevieve from the game. Lara Jean ends up winning and discovers the reason Peter and Genevieve have been hanging out: Genevieve confided in Peter about her father's affair with a younger woman.

Lara Jean meets with Peter at the treehouse the night before it is to be cut down. She tells him her wish is for things to go back to the way they were between them, and Peter confesses his love for her.

In 2015, the novel was nominated for the Goodreads Choice Awards for "Best Young Adult Fiction". It ultimately ended up ranking 2nd with a total of 26,274 votes, losing to All the Bright Places by Jennifer Niven.[2] In the same year, P.S. I Still Love You also won the Asian/Pacific American Award for Literature in the category "Young Adult".[3]

Main Article: To All the Boys: P.S. I Still Love You

In November 2018, it was reported that Netflix and Paramount Pictures' Awesomeness Films were in discussions to produce a sequel, and Netflix announced the development of a sequel featuring Lana Condor and Noah Centineo in December 2018. In March 2019, it was reported that Michael Fimognari, cinematographer on the first film, would make his feature film directorial debut with the sequel, taking over from the original film's director Susan Johnson, who would stay on to executive produce. It was also announced that Janel Parrish, Anna Cathcart, and John Corbett would return to co-star.

The sequel has also cast Jordan Fisher as John Ambrose McClaren, a past love of Lara Jean's, and Ross Butler as Trevor Pike, one of Peter's best friends. Madeleine Arthur will reprise her role as Chris, while Holland Taylor and Sarayu Blue have joined the cast as Stormy McClaren and Trina Rothschild respectively. 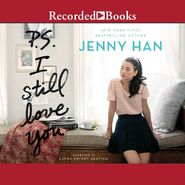 Vietnamese Edition
Add a photo to this gallery

Retrieved from "https://to-all-the-boys-ive-loved-before.fandom.com/wiki/P.S._I_Still_Love_You?oldid=7539"
Community content is available under CC-BY-SA unless otherwise noted.