The Letters are love letters that Lara Jean wrote to all the boys she ever loved.

Lara Jean writes love letters addressed to the boys she loved, with no intent to send them. It's purely for closure once she stops loving a boy. She spends lots of time on them and hides them in a teal hatbox given to her by her mother.

The Letters and Receivers

After receiving the letter, Peter read it and interrogated Lara Jean. This led to them fake-dating, for Lara Jean to hide her feelings from Josh Sanderson, and for Peter to show Gen that he could be happy without her. Then, they fell in love and dated for real. For more info, see Lara Jean or Peter Kavinsky.

First of all, I refuse to call you Kavinsky. You think you're so amazing, going by your last name all of a sudden. Just so you know, Kavinsky sounds like the name of an old man with a long white beard.

Did you know that when you kissed me, I would come to love you? Sometimes I think yes. Definitely yes. You know why? Because you think EVERYONE loves you, Peter. That's what I love about you. Because everyone does love you. Including me. I do. Always and forever. Here are all your best qualities:

You burp and you always say excuse me. You just assume everyone else will find it charming. And if they don't, I will stick up for you. You do care. You care a lot about what people think of you and me.

You always take the last piece of pizza. You always ask if anyone else wants it. You're so good at everything. Too good. You have given other guys a chance to be good, but they never took the opportunity.

The worst part of it is, that stupid nothing kiss is what made me start liking you. I never did before. I never even thought about you before. Gen has always said that you are the best looking boy in our grade, and I agreed, because sure, you are. But I still didn't see the allure of you. Plenty of people are good-looking. That doesn't make them interesting or intriguing or cool. Maybe that's why you kissed me. To do mind control on me, to make me see you that way. It worked. Your little trick worked. From then on, I saw you. Up close, your face wasn't so much handsome as beautiful. How many beautiful boys have you ever seen? For me it was just one. You. I think it's a lot to do with your lashes. You have really long lashes. Unfairly long. Even though you don't deserve it, fine, I'll go into all the things I like(d) about you:

One time in science, nobody wanted to be partners with Jeffrey Suttleman because he has BO, and you volunteered like it was no big deal. Suddenly everybody thought Jeffrey wasn't so bad. You're still in chorus, even though all the other boys take band and orchestra now. You even sing solos. And you dance, and you're not embarrassed. You were the last boy to get tall. And now you're the tallest, but it's like you earned it. Also, when you were short, no one even cared that you were short — the girls still liked you and the boys still picked you first for basketball in gym.

After you kissed me, I liked you for the rest of seventh grade and most of eighth. It hasn't been easy, watching you with Gen, holding hands and making out at the bus loop. You probably make her feel very special. Because that's your talent, right? You're good at making people feel special.

Do you know what it's like to like someone so much you can't stand it and know that they'll never feel the same way? Probably not. People like you don't have to suffer through those kinds of things. It was easier after Gen moved and we stopped being friends. At least then I didn't have to hear about it.

And now that the year is almost over, I know for sure that I am also over you. I'm immune to you now, Peter. I'm really proud to say that I'm the only girl in this school who has been immunized to the charms of Peter Kavinsky. All because I had a really bad dose of you in seventh grade and most of eighth. Now I never ever have to worry about catching you again. What a relief! I bet if I did ever kiss you again, I would definitely catch something, and it wouldn't be love. It would be an STD!

Lara Jean's original letter to Josh was never shown. However, after Margot leaves for university, she writes another letter to Josh, which is indeed shown in the books.

I liked you first. By all rights, you were mine. And if it had been me, I'd have packed you in my suitcase and taken you with me, or, you know what, I would have stayed. I would have never left you. Not in a million years, not for anything.

I still love you and that's a really huge problem for me and it's also a really huge surprise. I swear I didn't know. All this time, I thought I was over it. How could I not be, when it's Margot you love? It's always been Margot..

In the movie, John's letter was not discussed until the very last scene before the credits where Kitty, Lara Jean's younger sister, opens the door to John holding his letter.

I know the exact day it all started. Fall, eighth grade. We got caught in the rain when we had to put all the softball bats away d, "Come on, LJ!"

It was right then. That's when I knew, all the way down to my soaking-wet Keds. I love you, John Ambrose McClaren. I really love you. I might have loved you for all of high school. I think you might have loved me back. If only you weren't moving away, John! It's so unfair when people move away. It's like their parents just decide something and no one else gets a say in it. Not that I even deserve a say—I'm not your girlfriend or anything. But you at least deserve a say.

I was really hoping that one day I would get to call you Johnny. Your mom came to get you after school once, and a bunch of us were hanging out on the front steps. And you didn't see her car, so she honked and called out, "Johnny!" I loved the sound of that. Johnny. One day, I bet your girlfriend will call you Johnny. She's really lucky. Maybe you already have a girlfriend right now. If you do, know this—once upon a time in Virginia, a girl loved you.

I'm going to say it just this once, since you'll never hear it anyway. Good-bye, Johnny.

In the movie, Lucas returns his letter back to Lara Jean, understanding that they were never meant to be sent as they are too 'personal'. While reminiscing about their homecoming, Lucas tells Lara Jean that he is gay and later becomes a close friend to Lara Jean.

I never met a boy with manners as good as yours. You ought to have a British accent. At homecoming, you wore a cravat and it suited you so well I think you could wear one all the time and get away with it.

Oh, Lucas! I wish I knew what kind of girls you liked. As far as I can tell, you haven't dated anyone . . . unless you have a girlfriend at another school. You're just so mysterious. I hardly know a thing about you. The things I know are so unsubstantial, so unsatisfying, like that you eat a chicken sandwich every day at lunch, and you're on the golf team. I guess the one remotely real thing I know about you is you're a good writer, which must mean you have deep reserves of emotion. Like that short story you wrote in creative writing about the poisoned well, and it was from a six-year-old boy's perspective. It was so sensitive, so keen! That story made me feel like I knew you at least a little bit. But I don't know you, and I wish I did.

I think you're very special. I think you are probably one of the most special people at our school, and I wish more people knew that about you. Or maybe I don't, because sometimes it's nice to be the only one who knows something.

Although Kenny's letter was sent, he never received it, most likely because he moved.

In the movie, however, Lara Jean didn't send the letter to his house in the first place but instead to the camp they went to. Ultimately, the camp mailed the letter back to Lara Jean.

It's the last day of camp and possibly the last time I will ever see you because we live so far apart. Remember on the second day, I was scared to do archery and you made a joke about minnows and it was so funny I nearly peed my pants? hehe

I was really homesick but you made me feel better. I think I might've left camp early if it hadn't been for you, Kenny. So, thank you. Also, you're a really amazing swimmer and I like your laugh. I wish it had been me you kissed at the bonfire last night and not Blaire H. Take care, Kenny. Have a really good rest of the summer and a really good life. 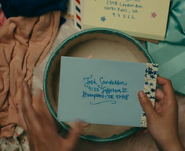 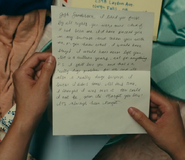 Josh's letter
Add a photo to this gallery

Retrieved from "https://to-all-the-boys-ive-loved-before.fandom.com/wiki/The_Letters?oldid=6678"
Community content is available under CC-BY-SA unless otherwise noted.